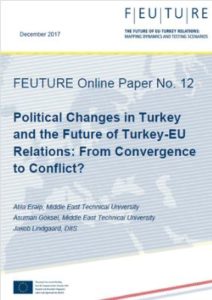 This paper presents an analysis of the political changes in Turkey since 1999, through a process-tracing exercise for four political drivers -namely democratisation, civil-military relations, the Kurdish question and foreign policy orientation- that unfold these changes under three periods of Turkey’s political history (1999-2002; 2007-2013; 2013-present); and secondly presenting an assessment of which of the three FEUTURE scenarios for Turkey-EU relations—convergence, cooperation or conflict —is the most likely to obtain in the near future on the basis of these drivers. With the ever rising degrees of unpredictability in international relations to the side, the paper argues that the political changes in Turkey during the AKP reign are likely to escalate the already conflict-ridden relationship between Turkey and European Union, but also lays bare the perhaps more important questions of how and why this is likely to be the case.