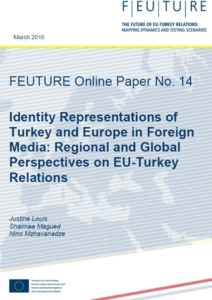 Identity Representations of Turkey and Europe in Global and Regional Media
This paper examines the global (Russian and US press) and regional (Egyptian and Georgian press) media coverage of the relations between Turkey and the European Union (EU) since 1999 with respect to identity and culture. Using the Critical Discourse Analysis methodology, the research gives an outlook on how significant Others make sense of the EU-Turkey relationship in the context of Turkey’s EU bid by analyzing the evolution of identity representations over time. The research findings assert that while the US media coverage supports Turkey’s accession to the EU, Egypt, Russia and Georgia remain sceptical towards the possibility of Turkey’s adherence to the EU. The analysis shows that the international and regional media emphases divergence rather than convergence between Turkey and Europe, and presents Turkey’s bid to join the EU as a prolonged process.
Authors: Justine Louis, Shaimaa Magued, Nino Mzhavanadze