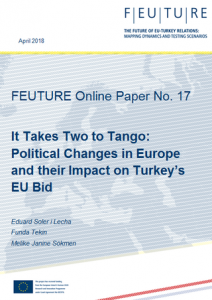 Political changes in the European Union and the EU member states, as much as political changes in Turkey, have an impact on EU-Turkey relations. This paper presents political changes in the EU as one of the drivers of EU-Turkey relations. It discusses whether the European “enlargement fatigue” has been, more specifically, “Turkey fatigue”. It looks at the politicisation of Turkey in European electoral debates, including some elections in the past that have shifted the direction of the relations. It then analyses three countries, Germany, France and the Netherlands, that held national elections in 2017, a year with a crowded schedule of elections across EU member states and in Turkey. While the topic of Turkey disappeared from the French electoral debates in 2017, it figured prominently in the other two elections, perhaps even more than in past elections. And while France is attempting to decouple bilateral relations from Turkey’s EU accession framework, this is not the case for the other two countries. As they stand, political changes in Europe eliminate a convergence scenario. This leaves two options as the most likely scenarios for the future of the relations: sporadic conflicts within a cooperation scenario or transactional cooperation centred on bilateral relations with member states.