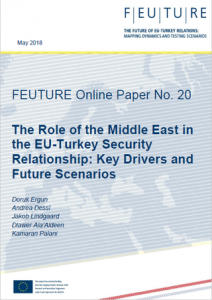 This paper analyses the effects of developments in the Middle East since 1999 on the security relationship between the European Union (EU) and Turkey. The chronological outlook allows us to identify three main drivers in the relationship. The first is ‘conflictual multipolarity,’ i.e. the conventional and non-conventional competition between different state actors in the Middle East. A cause and effect of this is regional instability and power vacuums, which create environments conducive for armed non-state actors to flourish. Second, transnational terrorism and radicalization which presents major threats to both parties and serves as potential drivers for cooperation if Ankara and EU states can agree on the risks and definitions posed by armed non-state actors. Third and perhaps most salient, is the Kurdish issue, which has seen a transformation from a primarily domestic issue for Turkey into an issue of regional and international magnitude, pitting the EU and Turkey in opposing camps.