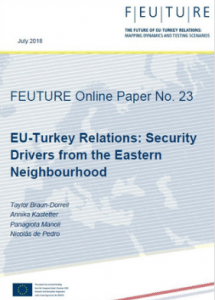 A number of developments in the Eastern Neighbourhood since 1999 have affected EU-Turkish security relations. In particular the rise of Russian influence in the region and Turkey’s increasingly complex relations with both the EU and Russia will affect EU-Turkish relations. This paper provides background on the Eastern Neighbourhood’s security context from 1999 and investigates the drivers that currently have the greatest effect on EU-Turkish security interests and threat perceptions in the region. The research suggests the EU-Turkish security relationship will be primarily conflictual, but with key points of cooperation particularly in fighting Russia’s information warfare tactics.

Find more information about the FEUTURE project and subscribe to the FEUTURE quarterly newsletter!