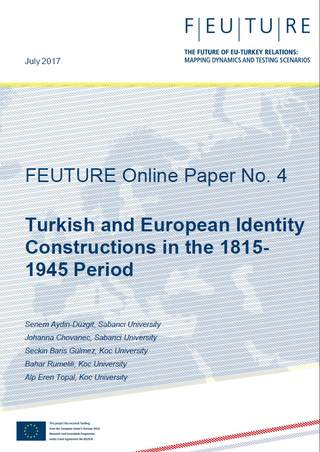 This FEUTURE paper focuses on Turkey’s and Europe’s perceptions of each other in identity and cultural terms between two periods: 1789-1922 and 1923-1945. It identifies the identity representations developed by both sides in response to key selected political and cultural drivers of these periods by subjecting the writings of prominent Ottoman bureaucrats and intellectuals in the first period as well as newspaper articles and editorials in Europe and Turkey in both periods to Critical Discourse Analysis (CDA). Identity representations are then discussed in relation to the pre-identified focal issues in the relationship; namely nationalism, status in international society, civilisation and state-citizen relations. The paper finds that there is no linear pattern to identity representations that are constantly contested in both the Turkish and European contexts. Certain positive and negative events trigger identity representations in novel ways, feeding into a set of relations which can be identified by conflict, convergence or cooperation.