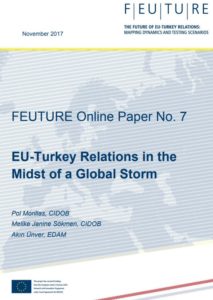 This paper presents the global movements, trends and actors driving EU-Turkey relations: name-ly, the global shift of power, the declining liberal international order and the rise of authoritari-anism, populism, the new US foreign policy under Trump and Russia’s rise under Putin. It analyz-es the impact of these drivers on the EU and Turkey respectively, and proposes the most likely scenario on the future of EU-Turkey relations under this constellation of drivers. It argues that the transformations at the global level have diminished the capacity of the EU to act as a “force for good” in international affairs which, coupled with Turkey’s will to emerge as a global actor, is likely to increase conflictual dynamics between both actors.