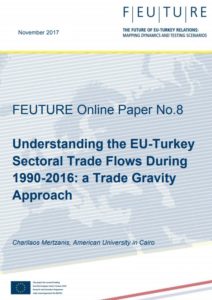 This paper explores the determinants of bilateral trade flows between Turkey and the EU coun-tries. A trade gravity model is used to analyze annual bilateral trade in general and in five differ-ent sectors of trade activity between Turkey, 15 EU countries and 5 non-EU countries during 1990-2016. The model is augmented with non-economic control variables that are relevant in determining the volume and direction of international trade. A dynamic panel GMM method is used for the estimation. The results reveal that the influence of the EU customs agreement on trade has been positive but moderate. The rise in trade volume is primarily driven by the in-crease in income levels in both Turkey and its trading partners, slightly affected by transport costs and only conditionally affected by average income levels depending on a number of coun-try-level factors. As a whole, Turkey seem to have realized positive gains from trade with the EU, which provides evidence that the bilateral customs agreement has been effective in fostering trade integration and the deepening of the EU-Turkey trade relations. The results imply that policy reform must be committed to raising the trading partners’ income growth in both abso-lute and relative terms; to encourage adjustments in Turkey’s productive structures that will speed up alignment in economic development levels; and most importantly to consider the long-term unobservable influence of institutions that mitigate economic relations through their impact on consumer and producer preferences for European and Turkish products.