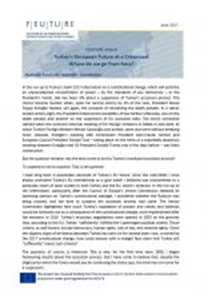 In the run-up to Turkey’s April 2017 referendum on a constitutional change, which will enshrine an unprecedented concentration of power – by the standards of any democracy – in the President’s hands, talk has been rife about a suspension of Turkey’s accession process. The chorus became louder when, upon his narrow victory by 1% of the vote, President Recep Tayyıp Erdoğan floated, yet again, the prospect of reinserting the death penalty. In a rather muted victory night, the President hinted at the possibility of two further referenda, one on the death penalty and another on the suspension of EU accession talks. The storm somewhat calmed when the Gymnich informal meeting of EU foreign ministers in Malta in late April, at which Turkish Foreign Minister Mevlut Cavusoğlu was invited, came and went without breaking news. Likewise, Erdoğan’s meeting with Commission President Jean-Claude Juncker and European Council President Donald Tusk –taking place on the heels of a reportedly disastrous meeting between Erdoğan and US President Donald Trump only a few days before– was fairly constructive. But the question remains: has the time come to end to Turkey’s moribund accession process? To suspend or not to suspend. That is the question.

Nathalie Tocci, the author of this paper, is the Director of the International Affairs Institute, Honorary Professor at the University of Tübingen, and Special Adviser to EU HRVP Federica Mogherini, on behalf of whom she wrote the European Global Strategy.

You can find the full publication in the following link.