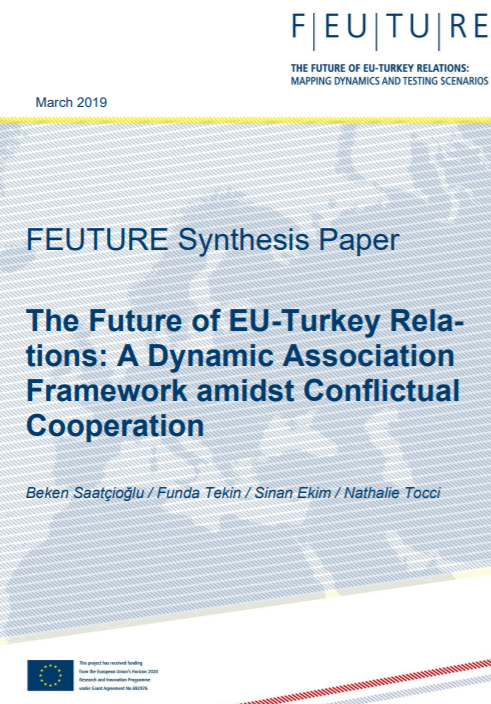 The FEUTURE final synthesis paper accomplishes two principal aims. First, it synthesizes FEUTURE’s research findings that study EU-Turkey relations in the six thematic areas of politics, identity, economy, security, energy and migration, focusing on how their respective drivers generate different degrees of conflict and cooperation in the relationship. Based on this synthesis, it argues that the scenario of “conflictual cooperation” – where cooperation is likely to endure despite the prevalence of conflictual dynamics mostly emanating from politics – is set to define EU-Turkey relations in the foreseeable fu-ture. Second, it develops an institutional design for the future relationship which, given the fact that Turkey’s EU accession process has now become dormant, accepts conflict as an endemic feature of the relations but tries to mitigate it by deepening cooperation. Upon assessing differentiated integration models the EU follows with member- and non-member countries, the paper concludes that, as a result of geopolitical proximity as well as deepened, multifarious interactions over several centuries, the EU–Turkey relationship has become too complex and dynamic to be captured by any single such model. It thus suggests a new institutional framework, termed a “dynamic association”, that would be comple-mentary to Turkey’s albeit stalled accession process. While being centered around a rules-based com-ponent represented by an upgraded EU-Turkey Customs Union agreement as a starting point, the as-sociation also includes more transactional dimensions of cooperation such as migration, security and energy. The paper concludes that conceptualized as such, the dynamic association promises to foster not only cooperative but also convergent trends between the EU and Turkey into and beyond the 2023 timeframe.