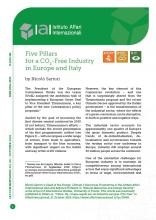 The President of the European Commission Ursula von der Leyen (UvdL) assigned the ambitious task of implementing a European Green Deal to Vice President Timmermans, a key pillar of the new Commission’s policy proposals. Guided by the goal of becoming the first climate-neutral continent by 2050 (if not before), Timmermans’s efforts will encompass a wide range of sectors, from trade to agriculture, from transport to the blue economy, with significant impact on the habits and way of life of EU citizens. However, the key element of this Copernican revolution – and one that is surprisingly absent from the Timmermans proposal and the recent Climate Decree approved by the Italian government – is the transformation of the industrial sector, where the effects of a green conversion can be disruptive, in both in positive and negative ways.