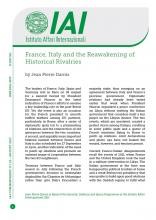 The leaders of France, Italy, Spain and Germany met in Paris on 28 August for a summit hosted by President Emmanuel Macron in the latest indication of France’s efforts to assume a key leadership role in the post-Brexit EU. Yet, the event is also an occasion for the French president to smooth ruffled feathers among EU partners, particularly in Rome, after a series of diplomatic spats led to a plummeting of relations and the resurrection of old grievances between the two countries. A second, and arguably more important bilateral summit between France and Italy is also scheduled for 27 September in Lyon, another indication of the need to patch up relations and promote an outward image of cooperation between the two EU neighbours.