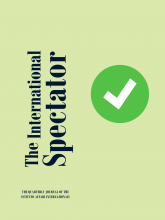 Recent Turkish foreign policy (TFP) under the successive AKP governments has seen different populist turns. A clear distinction can be made between the thin and thick populisms of TFP, based on the status of the West. The first decade of AKP rule, when foreign policy was thinly populist, was characterised by steady de-Europeanisation, increasing engagement with regional issues and a decentring of Turkey’s Western orientation. The turn toward thick populism has been characterised by anti-Westernist discourses in which the West is re-situated as the ‘other’ of Turkish political identity.