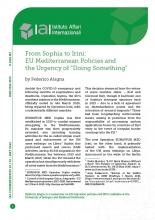 Amidst the COVID-19 emergency and following months of negotiations and deadlocks, Operation Sophia, the EU’s maritime mission in the Mediterranean, officially ended in late March 2020, being replaced by Operation Irini, with a substantially different mandate. The new Operation EUNAVFOR MED Irini is primarily tasked with the implementation of the UN arms embargo on Libya. Announced in the wake of the Berlin Conference on Libya and the escalating interventions on opposite sides by Turkey, Russia and the United Arab Emirates, Germany and the EU pushed through a renewed commitment to enforce the UN arms embargo as part of the Berlin Conference conclusions.