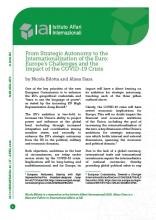 The COVID-19 crisis will have severe economic implications for Europe. This will no doubt impact the financial and economic ambitions of the Union, including the goal of increasing the internationalization of the euro, a key dimension of the Union’s ambitions for strategic autonomy, one which holds internal and external dimensions, spanning the economic and political domain. Due to the lack of a global currency, international trade and transnational investments require the intermediation of national currencies, thereby providing global political value to any international currency. If a country relies on foreign currency to compose its national reserve holdings or to issue bonds, it will be indirectly influenced by the monetary policy of that foreign country. These spillover effects are transmitted by trade flows, currency exchanges and the increase of assets and liabilities held by foreign countries.