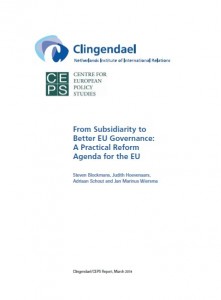 The Clingendael Institute and CEPS published the joint report ‘From Subsidiarity to Better EU Governance: A Practical Reform Agenda for the EU’, which explores the feasibility and relevance of some of the ideas for better EU governance in day-to-day decision-making. The findings are largely based on a one day seminar attended by more than 70 officials and experts from the EU member states and the European institutions on 23 January 2014 in The Hague. One of the main conclusions is that there is a broadly felt need for EU reform among the member states and European institutions. A wide-ranging list of practical solutions for improvement have been suggested. Any practical reform agenda for the EU must preclude treaty change, repatriation of competences and undermining the Community method. The emphasis of the member states and European institutions is on a better use of existing instruments, for example the yellow card procedure and the Commission’s impact assessments. The current political momentum – with various initiatives from other member states, European elections in May 2014 and the appointment of a new European Commission in the fall –could and should be used for (Council) intensified discussions about a reform agenda for the EU.

You can download the report in pdf format here.