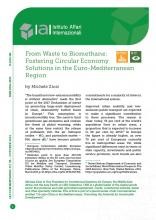 “The transition to low-emission mobility is without alternative” reads the first point of the 2017 Declaration of intent on promoting large-scale deployment of clean, alternatively fuelled buses in Europe. This assumption is incontrovertibly true. The need to limit greenhouse gas emissions and contain the threat of global warming, while at the same time restrict the release of pollutants into the air (nitrogen oxides – NOx and particulate matter – PM, above all), have become priority commitments for a majority of states in the international system. Improved urban mobility and low-emission public transport are expected to make a significant contribution to these processes. The reason is clear: today, 55 per cent of the world’s population lives in urban areas, a proportion that is expected to increase to 68 per cent by 2050. In Europe the figure is already higher, as over 70 per cent of Europeans currently live in metropolitan areas. Yet, while significant differences exist in terms of state capacity, investments and public service provision, such trends are also present in the southern Mediterranean, where 2.5 billion people are expected to live in cities by 2050.