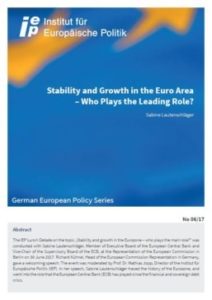 The IEP Lunch Debate on the topic “Stability and growth in the Eurozone – who plays the main role?” was conducted with Sabine Lautenschläger, Member of Executive Board of the European Central Bank and Vice-Chair of the Supervisory Board of the ECB, at the Representation of the European Commission in Berlin on 30 June 2017. Richard Kühnel, Head of the European Commission Representation in Germany, gave a welcoming speech. The event was moderated by Prof. Dr. Mathias Jopp, Director of the Institut für Europäische Politik (IEP). In her speech that is presented in this sixth paper of the German European Policy Series, Sabine Lautenschläger traced the history of the Eurozone, and went into the role that the European Central Bank (ECB) has played since the financial and sovereign debt crisis.