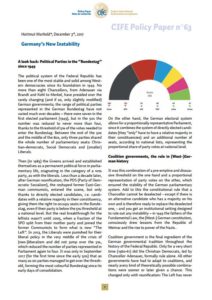 The political system of the Federal Republic has been one of the most stable and solid among Western democracies since its foundation in 1949. No more than eight Chancellors, from Adenauer via Brandt and Kohl to Merkel, have presided over the rarely changing (and if so, only slightly modified) German governments; the range of political parties represented in the German Bundestag have not varied much over decades – there were seven in the first elected parliament (1949), but in the 50s the number was reduced to never more than four, thanks to the threshold of 5% of the votes needed to enter the Bundestag. Between the end of the 50s and the middle of the 80s, only three parties shared the whole number of parliamentary seats: Christian-democrats, Social Democrats and (smaller) Liberals.