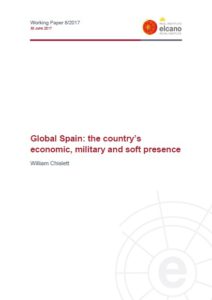 Almost 500 years since Juan Sebastián Elcano completed the first circumnavigation of the world and a vast empire was created, Spain has re-built a substantial but very different global presence. The Elcano Global Presence Index, first calculated for 1990 and which now covers 100 countries, measures this presence using objective data. The Index is based on three variables –economic, military and soft– and ranks Spain 12th.

The country paid a high price during its Great Recession, which ended in 2013, although it did not regain the pre-crisis 2008 GDP level until the second quarter of this year, but one area –internationalisation– was hardly affected. The direct investment abroad of Spanish companies remains strong and exports of goods and services have surged. As regards its soft presence, the country successfully absorbed some 6 million migrants and tourism continued to set new records every year. Official development cooperation, however, has declined, while the military presence has held up, although it accounts for a smaller share of the global presence.

The full report by William Chislett can be found here.