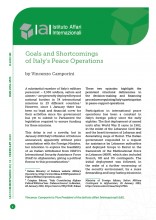 A substantial number of Italy’s military personnel – 5,950 soldiers, sailors and airmen – are presently deployed beyond national borders in 34 international missions in 23 different countries. However, since 1 January there has been no legal and financial cover for their activities since the government has yet to submit to Parliament the legislation required to ensure funding for these missions.

This delay is not a novelty, but in January 2019 Italy’s Minister of Defence announced, apparently without prior consultation with the Foreign Minister, her intention to explore the feasibility of an Italian withdrawal from NATO’s International Security Assistance Force (ISAF) in Afghanistan, giving a political flavour to this procrastination. These two episodes highlight the persistent structural deficiencies in the decision-making and financing procedures regulating Italy’s participation in peace-support operations.