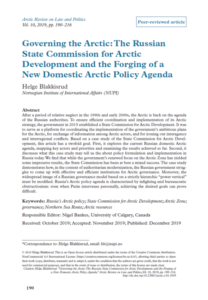 After a period of relative neglect in the 1990s and early 2000s, the Arctic is back on the agenda of the Russian authorities. To ensure efficient coordination and implementation of its Arctic strategy, the government in 2015 established a State Commission for Arctic Development. It was to serve as a platform for coordinating the implementation of the government’s ambitious plans for the Arctic, for exchange of information among Arctic actors, and for ironing out interagency and interregional conflicts. Based on a case study of the State Commission for Arctic Development, this article has a twofold goal.

First, it explores the current Russian domestic Arctic agenda, mapping key actors and priorities and examining the results achieved so far. Second, it discusses what this case study may tell us the about policy formulation and implementation in Russia today. The authors find that while the government’s renewed focus on the Arctic Zone has yielded some impressive results, the State Commission has been at best a mixed success. The case study demonstrates how, in the context of authoritarian modernization, the Russian government struggles to come up with effective and efficient institutions for Arctic governance. Moreover, the widespread image of a Russian governance model based on a strictly hierarchic “power vertical” must be modified. Russia’s Arctic policy agenda is characterized by infighting and bureaucratic obstructionism: even when Putin intervenes personally, achieving the desired goals can prove difficult.