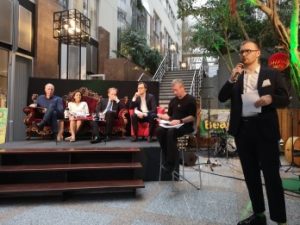 On 3 April 2019, the students of the TellUs EU Environmental Policy Lab — a joint project between the European Commission and the College — presented their suggestions for the next European Commission mandate. They presented their input paper during a special session of the ‘Beaulieu Café’, which took place in the premises of the Commission’s Directorate-General for Environment (DG ENV);

Before the event itself, they met with Directors who work every day on the topics they wrote on in specific topical clusters (cross-cutting issues, circular economy, urban development and land, and natural resources). It was followed by a meeting with the Deputy Director General of DG ENV, Ms Joanna DRAKE to discuss the outcome.

The Beaulieu café was introduced with an inspiring speech by Mr Daniel CALLEJA, Director General of DG ENV. Four students of the College of Europe then presented a number of ideas   encapsulated in their input paper. A panel debate, with participants Kurt VANDENBERGHE (Director for Policy Development and Coordination in DG RTD), Alexandre AFFRE (Director for   the Industrial Affairs department at BusinessEurope), Carmen MARQUES RUIZ (Policy coordinator on environment and water at the European External Action Service) and Hans  BRUYNINCKX (Executive Director of the European Environment Agency) discussed the issues raised by the students. Central in the debate was the role of the Commission in achieving   support for policies while creating a paradigm shift (in line with the ideas of Thomas KUHN, and applied to society and government) as put forward by the students. The students also   raised the point of challenges to proper governance (raising the need for a mission-oriented approach), as well as the need for attention to the redistributive effects of environmental  policies.

After the reaction by the panellists and the students, Ms Joanna DRAKE wrapped up the event.