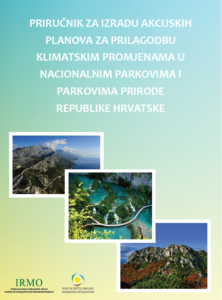 Authors from the Institute for Development and International Relations from Zagreb have prepared a handbook, for national parks and nature parks authorities, which they can use to draw up action plans for adaptation to climate change. It is written in Croatian and contains the process of developing action plans step by step as well as measures that correspond to current and future climate vulnerabilities. This is the first time in Croatia that such a handbook is written. Two Action Plans have already been drafted according to the Handbook – the one for the Nature Park Medvednica and the one for National Park Risnjak.

Climate change poses significant risks and challenges for national parks and nature parks in the Republic of Croatia and their unique natural features. Climate change can have a significant impact on ecosystems, processes and species, for whose protection national and nature parks are established. Temperatures increase and changes in rainfall may affect migration of vegetation and animal life to new habitats, fragmentations of habitats, as well as increase in frequency and intensity of fires, floods and droughts.