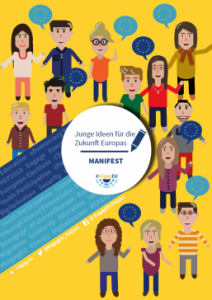 Just a few weeks before the European Parliament Elections 2019, the Institut für Europäische Politik published the manifesto “Young Ideas for the Future of Europe”, a result of the multi-month youth participation project #EngagEU. Thanks to co-funding from the European Commission under the Europe for Citizens programme, more than 500 citizens from more than 23 European Union Member States and Western Balkan countries were able to develop and share ideas and demands for the future of Europe through a total of four #YoungCitizens’FutureLabs. The manifesto was presented to German Federal President Frank-Walter Steinmeier by young rapporteurs of the project during the #1stYoungCitizens’Convention in Berlin in April 2019. In September 2019, the manifesto will be discussed with newly elected members of the European Parliament at a #2ndYoungCitizens’Convention in Brussels.