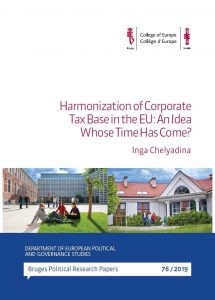 Inga Chelyadina, Harmonization of Corporate Tax Base in the EU: An Idea Whose Time Has Come?, Bruges Political Research Paper no. 76, April 2019

On 25 October 2016, the European Commission (EC) presented two legislative proposals to create a Common Consolidated Corporate Tax Base (CCCTB) for the European Union (EU). The proposals represent a re-launch of the 2011 CCCTB proposal, which was blocked by the Council. The 2011 file proposed a creation of an optional tax base, in which enterprises would have been able to choose whether to apply the national rules or the common ones. In the 2016 proposal, however, the European Commission intended to make the CCCTB compulsory for multinational enterprises. The paper uses the multiple streams theoretical framework to explain the failure of previous attempts and the potential success of the 2016 ambitious re-launch. The main argument states that there has been no coupling of policy streams in 1988 and 2011, however in 2016 the European Commission managed to couple three policy streams (problems, solutions and politics) and use the window of opportunity.