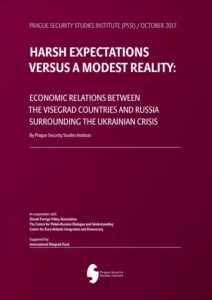 With the beginning of the millennium, the Visegrad countries – the Czech Republic, Poland, Hungary and Slovakia, started to improve their relations with Russia, which had only recently recovered from the turbulent times following the disintegration of the Soviet Union. Due to historical linkages and favourable geographical location, this development, together with the 2004 enlargement of the EU, set in motion various processes that had a positive effect on their mutual cooperation. Nevertheless, the Russian annexation of Crimea and its involvement in the war in Eastern Ukraine represented a major shift in relations with Russia for the Visegrad countries. Beyond the political level, the rise in tensions between the West and Russia soured over the crisis, and these tensions had a significant impact also on mutual economic ties and cooperation between Russia and the Visegrad states.