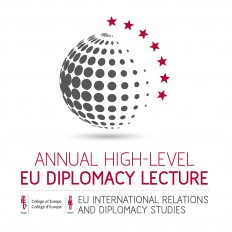 H.E. Marie-Anne Coninsx, EU Ambassador at Large for the Arctic, will deliver the fifth annual high-level EU Diplomacy Lecture at the College of Europe in Bruges. Ambassador Coninsx will address why and how the European Union is strongly engaged in the Arctic. She will explain the key challenges of the Arctic region, including the geo-economic and geopolitical implications of major transformations in the Arctic, and the main elements of the EU’s Arctic policy.

The event is open to the public but online registration is required before 18 October 2018, noon. For further information and the registration form, please visit the website.

​​Marie-Anne CONINSX is since September 2017 the European Union’s first Ambassador at Large for the Arctic. She previously was the EU Ambassador to Canada (2013-2017), after serving four years as the EU Ambassador to Mexico (2009-2013). In Canada, she extensively visited the Canadian Arctic. Her other postings abroad include having served as the number two at the EU Delegations in New York and in Geneva, which provided her with an extensive experience on multilateral issues.

Ambassador CONINSX has been an official of the European Union since 1984. She started her career in the European Commission at the Legal Service, and worked during 12 consecutive years as a staff member at Cabinets of three Commissioners, dealing respectively with: External Relations and Trade, Internal Market, Development Policy, and relations with the European Parliament. She also worked at the External Relations Department at EU headquarters, overseeing relations between the EU and Latin America. Ambassador CONINSX studied law at Gent University and carried out post-graduate studies at Cambridge University and at the European University Centre in Nancy.