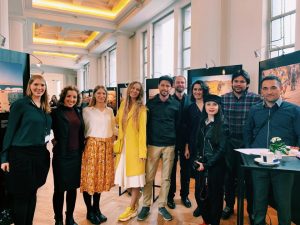 From 4 to 5 April, the Trans European Policy Studies Association organised the SEnECA Photo Exhibition “Daily lives in Central Asia” at the Centre for Fine Arts “BOZAR” in Brussels. The photos for the exhibition were collected through a photo contest in November 2018, which called for photos depicting daily life in Central Asia. The six winners of the photo contest from Kazakhstan, Germany/Kyrgyzstan, Tajikistan and Uzbekistan were invited to attend the opening of the photo exhibition.

The 65 selected photos depicted the remote and beautiful landscapes and cultural richness of Central Asian countries, providing a very diverse picture of day-to-day life in the region. As the photos were from a total of 17 photographers, they showed different life realities in the region: from vivid life in big cities to the calmer Nomad way of life in the mountains of Tajikistan and Kyrgyzstan. This contrast demonstrated not only the differences and similarities between Kazakhstan, Kyrgyzstan, Tajikistan, Turkmenistan and Uzbekistan, but also stimulated a reflection on the connections between Central Asia and Europe.

The photo exhibition opened on 4 April with a conference that included a key note speech, two panel discussions and the award ceremony for the winners of the photo contest. Participants included EU officials, diplomats, journalists, researchers, civil society and interested citizens.

Michael Kaeding, SEnECA Project Coordinator, welcomed all participants and introduced the project to the audience. He highlighted the cooperation between the different consortium partners from both Central Asia and Europe and announced the future SEnECA events in Brussels in July and November 2019.

Philippe van Amersfoort, Deputy Head of Central Asia Division in the European External Action Service (EEAS), emphasised in his key note speech that the upcoming EU Strategy towards Central Asia is crucial to strengthening the relations between the EU and Central Asia. The Strategy will include topics such as regional cooperation, culture, women empowerment and education. Afghanistan and investing in communication and people to people connectivity in Central Asia will also play an important role in the Strategy, according to the EU official.

The first panel on “What does the EU’s planned strategy on ‘Connecting Europe and Asia’ mean for Central Asia?” was moderated by Alica Kizekova, researcher at the Prague Institute of International Relations, and included the following speakers: Andreas Marazis, researcher at the European Neighbourhood Council, Jan de Kimpe, Managing Director of PICS Belgium, and Philippe van Amersfoort. Philippe van Amersfoort indicated that there are three main priorities for the future of EU-Central Asia relations: a better regulated framework in terms of trade, a more developed trans-European network and a significant investment in energy and digital economy. Andreas Marazis emphasised the need for EU investment in the region in terms of cooperation, and that the strategy needs to be tailored to the people. An element of ownership should be present in all planned activities, he said. Jan de Kimpe shed light on the state of transport routes in the region and the role of other international actors, such as China, in building road connections in Central Asia.

The second panel on the topic of “What role do education and culture play in bringing European and Central Asian citizens closer together?”, moderated by Julian Plottka from the Institut für Europäische Politik, included Aida Liha-Matejicek, Head of Unit for culture, education and health, DG DEVCO, Louise Haxthausen, Director of the UNESCO Liaison Office in Brussels, and Christian Wagner, Team Leader of the Central Asia Education Platform. Liha-Matejicek highlighted that culture and education should be the main priority in the region and referred to the Erasmus+ programme as an important tool to increase education cooperation between the EU and the Central Asian states. Furthermore, Louise Haxthausen stressed that culture and education are crucial to the future of the people and more investment in this area should be made. Lastly, Christian Wagner enlightened the audience with a number of very positive success stories on the high-quality level of education in the region and the utmost importance of education in preventing radicalization.

Before the exhibition was officially opened, the six best contestants of the photo contest were awarded. They shortly introduced themselves and shared personal reasons behind their passion for photography as well as their attitudes towards their home countries.

The exhibition remained open to the public until 5 April. In total 212 visitors attended the exhibition.