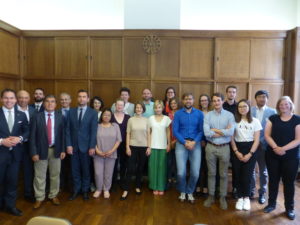 On 11 and 12 July 2019, TEPSA organised the SEnECA Recommendations Workshop in Brussels. The goal of the fifth SEnECA event was to bring SEnECA consortium members and Brussels stakeholders together in order to discuss the implementation of the new EU Strategy on Central Asia, which has been ratified by the European Council in June 2019. The strategy means a new depth of cooperation between the two regions, meaning that SEnECA – as a project aiming at strengthening EU-Central Asia relations – is highly interested in advising and supporting the upcoming implementation process of the strategy. The 2-day Recommendations Workshop spurred discussions which will flow into two final SEnECA policy papers to be presented to the public at the SEnECA final conference in Brussels on 14 and 15 November 2019. Once published, the policy papers will then also be available here.

The highlight of the workshop was an elaborate keynote speech of EU Special Representative towards Central Asia, Peter Burian, who has made a great effort visiting European and Central Asian cities during the past two years and consulting with a multitude of public officials, representatives of the private sector and civil society. The result of these consultations is a strategy which “does not only look good on paper, but is supported by the partners in Central Asia and will be fully implemented“, according to Ambassador Burian. The focus of the new strategy is on “partnership for resilience“ and “partnership for prosperity“. These objectives shall be achieved through a number of old and new cooperation tools, one of which stands out: the first “EU-Central Asia Forum”. This forum shall regularly bring together representatives of civil society, academics and think tankers as well as officials from the EU and Central Asia.

After Ambassador Burian’s speech, SEnECA consortium members Anna Gussarova (CAISS, Kazakhstan) and Dr. Māris Andžāns (LIIA, Latvia) presented the SEnECA recommendations for the implementation of the new EU strategy. They stressed that special attention should be paid to establishing qualitative and quantitative measurement methods for the assessment of the impact of the strategy and of the developments in the region. Furthermore, the researchers pointed out that the EU should put more effort into improving its image in Central Asia through a thorough communication strategy, which shall make understandable to Central Asians what the EU stands for and what it actually does in the region.

The main part of the workshop consisted of a views exchange with all attendees of the workshop on the presented recommendations. Different aspects of the new strategy and ideas on its implementation  were discussed in three parallel working groups, focusing on 1) political and security relations, 2) economic relations and trade and 3) cultural and other relations respectively. Three representatives of EU institutions introduced the respective working group topic to the participants: Boris Yarochevitch from the EEAS, Maciej Madalinski from DG DEVCO and Angela Atzori from the DG DEVCO. In the working groups, a variety of stakeholders took part: EU officials, state officials, embassy staff, researchers, representatives of international organisations and civil society. In total 53 people attended the event. The results of the lively debates within the working groups comprise the main part of the two final SEnECA recommendations policy papers.

Day 2 of the Recommendations Workshop offered the opportunity for internal consortium talks and for a mutual update among the partners on the progress within the different work packages. The SEnECA project lasts from January 2018 until December 2019 and will end with a public conference in Brussels on 13-15 November 2019. SEnECA researchers have so far produced 13 policy papers on developments in Central Asia vis-a-vis the European Union and other key actors, 2 background papers on the current state of affairs of Central Asian Studies in the EU and EU Studies in Central Asia, and a Stakeholder Analysis identifying the most important stakeholders in EU- Central Asia relations. In the upcoming months, the project will finalize the Agenda for Future Research Cooperation as well as the Long-Term Central Asia Communication Strategy, among other documents. All published documents can be found on the SEnECA website under Policy Papers.