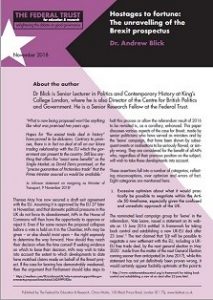 Dr Andrew Blick, Hostages to Fortune: The unravelling of the Brexit prospectus, November 2018

Theresa May has now secured a draft exit agreement with the EU. Assuming it is approved by the EU 27 later in November, and that domestic political pressures in the UK do not force its abandonment, MPs in the House of Commons will then have the opportunity to approve or reject it. Even if for some reason the proposal collapses before a vote is held on it in the Chamber, MPs may be given – or else should insist upon – the right expressly to determine the way forward. How should they reach their decision when the time comes? If seeking evidence on which to base their decision, MPs may wish to take into account the extent to which developments to date have matched claims made on behalf of the Brexit project. If the case for leaving has demonstrably weakened, then the argument that Parliament should take steps to halt this process or allow the referendum result of 2016 to be revisited is, as a corollary, enhanced. This paper discusses various aspects of the case for Brexit, made by senior politicians who have served as ministers and by the ‘leave’ campaign, that have been shown by subsequent events or realisations to be seriously flawed, or simply wrong. They are considered for the benefit of all MPs who, regardless of their previous position on the subject, will wish to take these developments into account.

For the full paper: http://fedtrust.co.uk/our-work-on-europe/hostages-to-fortune/