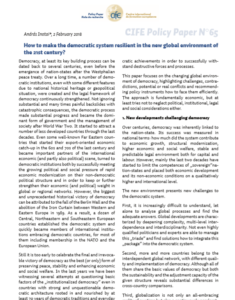 Democracy, at least its key building process can be dated back to several centuries, even before the emergence of nation-states after the Westphalian peace treaty. Over a long time, a number of democratic institutions, even with some different features due to national historical heritage or geopolitical situation, were created and the legal framework of democracy continuously strengthened. Not ignoring substantial and many times painful backslides with catastrophic consequences, the democratic process made substantial progress and became the dominant form of government and the management of society after World War Two. It started to attract a number of less developed countries through the last decades. Even some well-known Far Eastern countries that started their export-oriented economic catch-up in the 60s and 70s of the last century and became important partners of the international economic (and partly also political) scene, turned to democratic institutions both by successfully meeting the growing political and social pressure of rapid economic modernization on their non-democratic political structure and in order to keep or further strengthen their economic (and political) weight in global or regional networks. However, the biggest and unprecedented historical victory of democracy can be attributed to the fall of the Berlin Wall and the abolition of the Iron Curtain between Western and Eastern Europe in 1989. As a result, a dozen of Central, Northeastern and Southeastern European countries established the democratic system and quickly became members of international institutions embracing democratic countries, for most of them including membership in the NATO and the European Union.