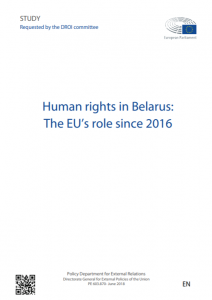 TEPSA has recently coordinated a study for the European Parliament’s Subcommittee on Human Rights (DROI) on Human rights in Belarus – The EU’s role since 2016.

The study was carried out by Giselle Bosse (Maastricht University, Netherlands) and Alena Vieira (Universidade do Minho, Portugal).

The study provides an overview of the European Union’s contribution to promoting and protecting human rights in Belarus since 2016. The analysis presents the main human rights trends in Belarus, examining legislation, policy commitments and violations of human rights. While the Belarusian government has made nominal concessions towards the EU, no systemic progress in terms of human rights has been made in the post-2016 period. The study also describes and assesses the EU’s human rights promotion activities in bilateral EU-Belarus relations, within the context of the Eastern Partnership multilateral dimension and in regard to financial assistance. Although the EU has expanded the range of its political dialogue with Belarus since 2016, it has had very little influence over the human rights situation in the country. The EU’s impact has been limited not just because of the very nature of the Belarusian regime. EU institutions and member states have increasingly prioritised geopolitical interests as well as the stability and resilience of Belarus over human rights concerns. In its conclusions, the study recommends that the EU should increase efforts to mainstream human rights in all aspects of its relations with Belarus and find a better balance between ‘normalisation’ and ‘conditionality’ based policy approaches vis-à-vis the country.

The full paper can be downloaded here.