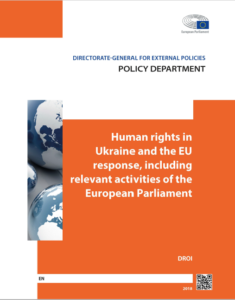 The present study provides an overview of how the European Union and the European Parliament (EP) contribute to the promotion and protection of human rights in Ukraine. The analysis adopts an institutional approach, separately addressing the role of the various EP bodies involved, such as the plenary itself and the Subcommittee on Human Rights (DROI). The actions of the EU-Ukraine Parliamentary Association Committee (PAC), a parliamentary body created by the Association Agreement, as well as those of the European Parliament’s Delegation to the PAC are included in this analysis. The territories controlled by the Ukrainian government and those that are temporarily occupied, namely Crimea and parts of eastern Ukraine, are addressed separately in the study. In terms of thematic focus, the EP’s activities aimed at human rights promotion have been dominated by the issue of the Crimean Tatars, the Ukrainian political prisoners illegally held in Russia, and the human rights situation in eastern Ukraine. The most significant conclusion is that the more entrenched the violation of Ukraine’s territorial integrity becomes, the wider the spectrum of human rights issues extends, in protection of which the EP is able to step to the fore and take action.