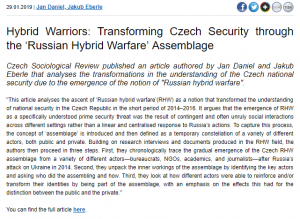 Czech Sociological Review published an article authored by Jan Daniel and Jakub Eberle that analyses the transformations in the understanding of the Czech national security due to the emergence of the notion of “Russian hybrid warfare”.

This article analyses the ascent of ‘Russian hybrid warfare’ (RHW) as a notion that transformed the understanding of national security in the Czech Republic in the short period of 2014–2016. It argues that the emergence of RHW as a specifically understood prime security threat was the result of contingent and often unruly social interactions across different settings rather than a linear and centralised response to Russia’s actions.