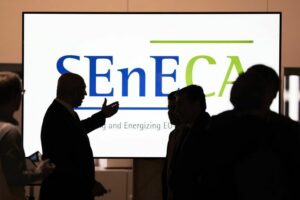 The Trans European Policy Studies Association (TEPSA) and the Centre international de formation européenne (CIFE) organized the SEnECA Final Conference “What Future for EU-Central Asia Relations?” in Brussels on 14 and 15 November 2019. The event was the concluding conference of the Horizon 2020 project „SEnECA – Strengthening and Energizing EU-Central Asia relations“. It aimed at bringing together stakeholders working in the field of EU-Central Asia relations in order to discuss SEnECA’s recommendations for the implementation of the new EU strategy on Central Asia and for the future collaboration between the two regions in specific sectors.

The conference was attended by approximately 215 persons including EU policymakers, diplomats, researchers, civil society actors and journalists from Europe and Central Asia. Panel discussions focused on the EU-Central Asian cooperation in education and research, on awareness-raising and communication, on culture as a catalyst of social change, and on connectivity between Asia and Europe. The final panel gave an outlook on EU-Central Asia relations for 2030.

Key speaker Andris Ameriks, vice-chair of the DCAS at the European Parliament (EP), stressed that the current EU legislation (2019-2024) is keen on continuing the successful political cooperation with Central Asia and will soon set up delegations to discuss concrete policies. Ambassador Peter Burian, EU Special Representative for Central Asia, emphasized that Central Asia should not be regarded as a transit region only, but as a place where “trains stop”, referring to how connectivity should play a key role in bringing prosperity to Central Asian societies. The rather positive spirit was upheld during the rest of the 2-day conference where experts on both sides highlighted the benefits of and potential for a deeper cooperation between Central Asia and Europe.

An intriguing discussion took place during the panel on culture as a catalyst for social change. The question was raised how cultural projects can serve as an engine for economic development and a tool to promote human rights and justice. Florian Coppenrath, associated research fellow at Leibniz-Zentrum Moderner Orient, presented his research results showing that contemporary hip-hop singers have contributed to foster critical debates in the Kyrgyz society. Furthermore, interesting questions on the scope of the term “connectivity” were raised during the panel on that topic. One of the insights gained here was that the EU Connectivity Strategy between Europe and Asia, published in September 2018, understands connectivity especially as digital and human connectivity with infrastructures and financing as enhancing pillars.

All in all, the SEnECA final conference was a highly successful event, not only because it provided the conference participants with the opportunity to discuss SEnECA project results and develop ideas for follow-up research projects, but also because it gave visitors a chance to experience the cultural dimension through the SEnECA Photo Exhibition which depicted pictures of nature and everyday life in Central Asia. The conference concluded with the screening of the Kyrgyz film “The Song of the Tree” that portrayed Kyrgyz cultural traditions and their clashes with modern life.