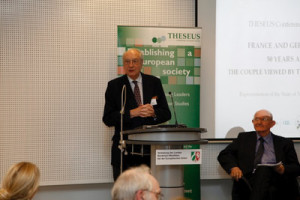 Philippe de Schoutheete’s life and work document a historical period – significant for the integration process of Europe overall. More than just by his skills as diplomat he was also a model for the intensive and productive cooperation between those with practical responsibilities for EU policies and politics, and us in the ivory tower, responsible for proper academic research and teaching. As a bridge between practitioners and scientists, he was active in many joint ventures, such as Theseus – Establishing a European Society, or the Jean Monnet Project SUMMIT. He was always open for discussions with several generations of EU scholars.

Philippe de Schoutheete contributed with seminal articles to the reality focused research on the early European Community. Only recently, he still published ‘La création de l’Euro’ (2016). One of his foci was however the Political Cooperation, e.g. with ‘La coopération politique européenne’ (1980). As co-editor of the volume ‘Foreign Policy of the European Union: From EPC to CFSP and Beyond’ Philippe de Schoutheete was a highly esteemed and generous colleague.

A second focus of Philippe de Schoutheete was the European Council, on which he published ‘The European Council’ (2002, with H Wallace) and ‘The European Council’ (in J Peterson and M. Schackleton: ‘The institutions of the European Union’, lastly 2012). As for his knowledge on this key institution, it was logical that he became Member of our SUMMIT Advisory Board and supported our work with his excellent analyses, his thoughtful and to the point comments at conferences and helpful input whenever needed. We thank him sincerely for his kind, continuous encouragement and will remember his gentlemanlike friendliness.

Baron Philippe de Schoutheete (1932-2016) was ambassador in Madrid, political director at the Belgian Foreign Ministry and Belgium’s permanent representative to the European Union from 1987 to 1997. He was special adviser to Commissioner Michel Barnier and has been Guest Professor at the University of Louvain and at the College of Europe Natolin (Poland) as well as Senior Fellow of the European Department of Egmont Institute (Royal Institute for International Relations).