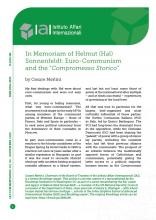 Euro-communism came as a reaction to the bloody crackdown of the Prague Spring by Soviet tanks in 1968 (a reaction not seen 12 years earlier after a similar repression in Hungary); in part it was the need to reconcile Marxist ideology with societies having acquired enviable affluence in a liberal system; and last but not least, some thirst of power at the national level after multiple – and at times successful – experiences of governing at the local level. All that was true in particular for the largest, best-organised and most culturally influential of those parties: the Partito Comunista Italiano (PCI) in Italy, led by Enrico Berlinguer.