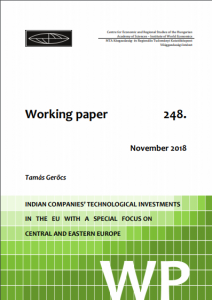 Tamás Gerőcs: Indian companies’ technological investments in the EU with a special focus on Central and Eastern Europe

India is one of the fastest growing economies in the world whose global share in “outward foreign direct investment” (OFDI) among the developing countries increased from a low level to second only to China. It has not only been a spectacular rise in Indian overseas investment activity, but the nature and the structure of Indian OFDI have also changed in the last decades. In the following paper we will examine the reasons and driving forces behind this spectacular rise, concentrating mostly on those host country characteristics that are the pull factors in attracting Indian investments. We follow the most recent literature on global value-chain specialization as much of Indian outward foreign investment is following a technology-seeking strategy currently. We choose Central and Eastern Europe as our case study because the region combines attributions of both advanced and developing countries in attracting Indian investment.