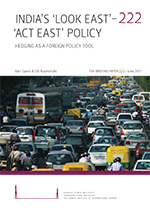 Against the backdrop of an evolving strategic context in the Asia-Pacific region, competition is mounting between India and China in the realms of both security and trade. While the US’s relative influence in the region is declining and China is rapidly ascending as an increasingly assertive regional power, India is seeking to redefine its geostrategic posture.

India’s Eastward focus seeks to establish external security and trade-related cooperation with third countries through the formation of so-called strategic partnerships, in an effort to balance a rising China. Examples of these increasingly important bilateral ties include partnership agreements with ASEAN, Australia, South Korea and, no less importantly, Japan.

At the same time, India’s policy can be seen as part of a hedging strategy, as it also entails engagement and cooperation mechanisms with China. India has been engaging China economically, and a partnership with the latter can be put into action in terms of enhancing connectivity, which is the enduring purpose of India’s ‘Look East’ – ‘Act East’ agenda.