The College of Europe was the world’s first university institute of postgraduate studies and training in European affairs.

It was founded in 1949 by leading European figures such as Salvador de Madariaga, Winston Churchill, Paul Henri Spaak and Alcide de Gasperi in the wake of the first Congress of the European Movement in the Hague in 1948. The idea was to establish an institute where university graduates from many different European countries could study and live together.

Today, the College consists of two campuses, one in Bruges and the other established in Natolin, (Warsaw, Poland) in 1993 with the support of the European Commission and the Polish government. The College now operates as ‘one College – two campuses’ and what was once referred to as the ‘esprit de Bruges’, is now known as the ‘esprit du Collège’.

Each academic year at the College is presided by a ‘Patron’ who has contributed to European integration and the values of the European Union. In 2014-2015, the Promotion Patrons are Giovanni Falcone and Paolo Borsellino, the anti-mafia magistrates who were assassinated in 1992, in order to honour their dedication to the defence of the rule of law, the authority and legitimacy of the state and the security of citizens.

The College of Europe is characterised by its academic independence, its bilingualism, the diversity of its teaching staff and its multicultural environment, which together create a genuine European ‘microcosm’. Entry requirements and rigorous selection procedures ensure that students who are recruited are of the highest calibre. The student body, currently 315 students in Bruges and 130 in Natolin, reflects a variety of cultures and personal experiences. Students come from over 50 countries, many speaking several languages.

The accredited academic programmes of Bruges and Natolin (Warsaw) provide students with a specialised grounding in the European dimension of their fields of study, as well as an in-depth understanding of Europe in all its complexity. In Bruges, students enrol in one of four academic departments:European Economic Studies;European Legal Studies;European Political and Administrative Studies and EU International Relations and Diplomacy Studies.At Natolin the study programme analyses the process of European integration from a pluri-disciplinary perspective. Upon completion of the programme, students are awarded the ‘Master of Arts in European Interdisciplinary Studies’.

Each department is flanked by a team of Academic Assistants who support the students through teaching activities as well as research. Some Academic Assistants also work alongside Research Chairs such as the EP Geremek European Civilisation Chair, the European Neighbourhood Policy Chair, theInBev-Baillet Latour Chair of European Union – China Relations, and the European Energy Policy Chair. 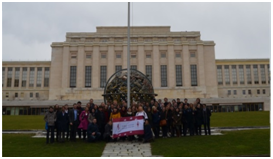 Throughout the year at the College, students participate in many academic pursuits such conferences, simulations, moot court exercises, high level lectures, and study trips to international and European institutions. They also take part in organising their own cultural events in the form of “National Days” to allow their colleagues to discover their national heritage.

Picture: Students of the EU International Relations and Diplomacy Studies Department at the United Nations in Geneva.