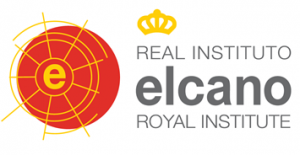 The Elcano Royal Institute is a think-tank for international and strategic studies that analyses world events and trends from a Spanish, European and global perspective. It studies Spain’s place in the world and makes all its research available to the Spanish public at large.

The Elcano Royal Institute was established in 2001 as a private foundation under the honorary presidency of the then Prince of Asturias, Felipe de Borbón y Grecia, a position he continues to hold following his proclamation as King of Spain in June 2014. The Institute’s Board of Trustees comprises prominent figures linked to Spanish foreign policy and representatives of both the companies that fund the Institute and the Spanish Ministries of Foreign Affairs and Cooperation, Defence, Education, Culture and Sports, and Economy and Competitiveness.

The Institute has a stable team of highly-qualified analysts along with a wide-ranging network of contributors and associate experts.

As a forum for discussion and debate, the Institute frequently organises different types of meetings –with both individual personalities and working groups– as well as seminars, public debates and conferences. The Institute’s work is made available in a wide range of publications, all of which are accessible on its website.