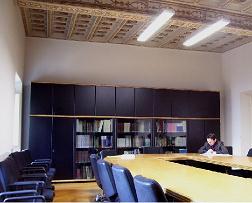 An Italian non-profit organization, the Istituto Affari Internazionali (IAI) (English: Institute of International Affairs) was founded in 1965 by Altiero Spinelli, its first director, thanks to joint contributions from the Fondazione Olivetti, the cultural and political association Il Mulino and the Nord e Sud Research Center, as well as to substantial support from the Ford Foundation. Spinelli took North American and British think tanks as a model: he created a flexible private organization, distinct from university institutes and governmental or ministerial research centers, yet capable of interacting and cooperating with the government, the public administration, national economic actors and foreign academic centers. These are still the IAI’s outstanding features today.

In 1991 the Institute moved to Palazzo Rondinini, an elegant eighteenth century building in the heart of Rome. Many of the activities organized by the Institute take place in its Baroque ceremonial rooms. The Institute’s main objective is to promote an understanding of the problems of international politics through studies, research, meetings and publications, with the aim of increasing the opportunities of all countries to move in the direction of supranational organization, democratic freedom and social justice (IAI Bylaws, Article 1).

The research staff is made up of nearly 30 researchers, including 10 area or project directors. Most of the research projects are carried out together with other institutes with similar characteristics.

The Institute is an active participant in – and has sometimes even been a promoter of – important transnational research networks:

– iai.it: the IAI’s official website
– affarinternazionali.it: the site of the webzine by the same name
– effectivemultilateralism.info: a site dedicated to the role of the European Union in the United Nations.