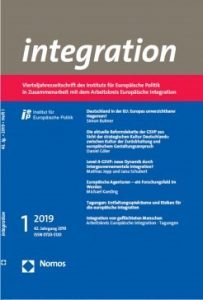 In the new issue of integration, Simon Bulmer examines Germany’s potential to assume a hegemonic role within the European Union. Daniel Göler analyses the German strategic culture and its compatibility with the current reform debate about the Common Security and Defence Policy (CSDP). The article of Mathias Jopp and Jana Schubert also deals with the CSDP and examines the influence of the new intergouvernementalism on the defence capacity of the European Union. Michael Kaeding introduces the relatively new research field of EU agencies and gives an overview about the development and the tasks of these agencies. The issue also contains a summary of the 10th annual meeting of the German-Nordic-Baltic Forum in Stockholm, organised by the Institut für Europäische Politik and the Swedish Institute of International Affairs. The “Arbeitskreis Europäische Integration” reports on its Annual Colloquium 2018 about the European Union as refugee destinat