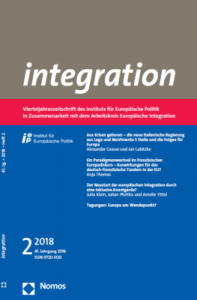 In the new issue of integration, Alexander Grasse and Jan Labitzke deal extensively with the Italian parliamentary elections of March 2018. Anja Thomas focusses on Emmanuel Macron’s speeches on the future of the EU. According to the author, for the first time ever Macron translates the domestic role of the French president as unifier of the nation to the European Union that marks a change of paradigm in the French presidential discourse on the EU. Julia Klein, Julian Plottka and Amelie Tittel present selected results of the research project “The Relaunch of Europe”, where Germany, France, Belgium, Luxemburg and Spain turn out to be part of the group of member states that are willing to further deepen integration in all areas of the study. Carolin Marx and Janny Schulz report on the 2017 German-Portuguese Expert Meeting which was organised by the Institut für Europäische Politik as part of its bilateral dialogue formats.

Check it out here.