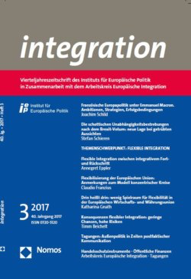 In the new issue of integration, Joachim Schild analyses Emmanuel Macron’s European policy approach with a special focus on the role of Germany to support its implementation and the opportunities of a strong and reenergised German-French co-leadership for the Union. Stefan Schieren traces the development of the multilayered relations of constitutional, political and European factors that are crucial for understanding the current debate on Scotland’s future relations with the EU and evaluates the chances of Scottish independence in relation with Brexit. The thematic focus “flexible EU” in the current issue covers different aspects of differentiated integration. Political proposals and scientific concepts of flexible integration are presented and categorised according to their potential for integration/disintegration. Linked herewith is the question to what extent flexibility fosters or endangers coherence of the EU. In addition, the issue examines whether flexibility can play a role in strengthening Economic and Monetary Union and how this has to be organised in order to avoid negative consequences of flexible integration. It also contains information on the ninth German-Nordic-Baltic Forum and the ‘Arbeitskreis Europäische Integration’ reports on conferences about trade defence instruments and public finance.