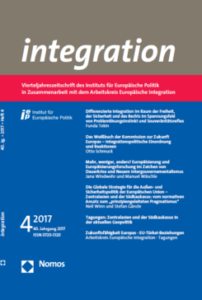 In the new issue of integration, Funda Tekin explains the basic principles and concepts of differentiated integration in the Area of Freedom, Security and Justice and focuses on the member states’ dilemma between their problem solving instinct and their sovereignty reflex. Otto Schmuck analyses the White Paper of the Commission on the Future of Europe and the corresponding reactions of the heads of state or government of the member states, EU institutions, academia and EU citizens. Jana Windwehr and Manuel Wäschle discuss the consequences that the European Union’s ongoing and multidimensional crisis and the associated changes of the European “rules of the game” – summed up under the controversial heading New Intergovernmentalism – could mean for Europeanisation pro-cesses and research. Neil Winn and Stefan Gänzle discern the impact of the new 2016 Global Strategy for the European Union’s Foreign and Security Policy on the EU’s evolving strategy towards Central Asia and the South Caucasus by focusing on the changing geopolitical context as well as domestic factors in the target countries and the EU itself.