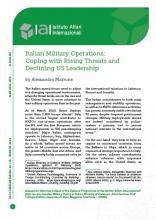 The Italian armed forces need to adjust to a changing operational environment, whereby threat levels are on the rise and the United States is more reluctant to lead military operations than in the past.

As of March 2020, Rome deploys more than 7,300 troops abroad. Italy is the second largest contributor to NATO’s out-of-area operations after the US, and the first European nation for deployments in UN peacekeeping missions. Major Italian contingents operate in Lebanon, Iraq, Afghanistan, Kosovo, Libya, Niger and Somalia. As a whole, Italian armed forces are active in 24 countries across Europe, the greater Middle East and Africa, and Italy currently holds command roles in the international missions in Lebanon, Kosovo and Somalia.