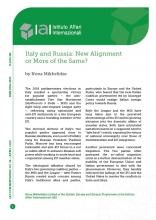 The 2018 parliamentary elections in Italy marked a spectacular victory for populist parties – the anti-establishment Five Star Movement (MoVimento 5 Stelle – M5S) and the right-wing anti-migrant League party –, reflecting rising nationalist and anti-EU sentiments in a key European country and a founding member of the EU. The electoral rhetoric of Italy’s two populist parties appeared close to Russian desiderata, even a sort of lullaby song for Russian President Vladimir Putin. Moscow has long encouraged nationalist and anti-EU forces in a not so subtle effort to enhance Russian soft power while working to erode trust and cooperation among EU member states.