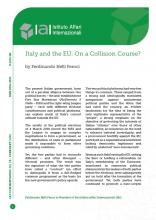 The present Italian government, born out of a peculiar alliance between two political forces – the anti-establishment Five Star Movement (MoVimento 5 Stelle – M5S) and the right-wing League party – each with different electoral constituencies and political platforms, can explain much of Italy’s current attitude towards the EU.

The two political platforms had very few things in common. These ranged from a strong and ideologically motivated antagonism against mainstream political parties and the élites that had ruled the country; an evident fascination for the idea of being the only legitimate representative of the “people”; a strong emphasis on the objective of protecting the interests of Italian “citizens” over those of other nationalities; an insistence on the need to enhance national sovereignty; and a pronounced hostility against the EU, portrayed as a supranational institution lacking democratic legitimacy and ruled by unelected “euro-bureaucrats”.